I am still moving along on my “11 mittens in 2011” project, albeit slowly. My most recent FO is a pair I’m calling “Gloaming,*” and made from a very, very popular mitten pattern called Bella’s Mittens.  I’m planning to send these off to the Great Frozen North of central New Hampshire.

This pattern was easy to follow, and if you’ve done any cables at all, I think you’ll find these to be very easy. If you’ve done lots of cables, you’ll probably be able to memorize the repeat after one or two times.  I really like this project and suspect I’ll do more.

As is so often the case, I customized the thumb of the first mitten, didn’t take any notes… and couldn’t recall exactly what I’d done for the second thumb. No worries; they both seem to fit a wide variety of hands, but it would have been nice to have some notes. 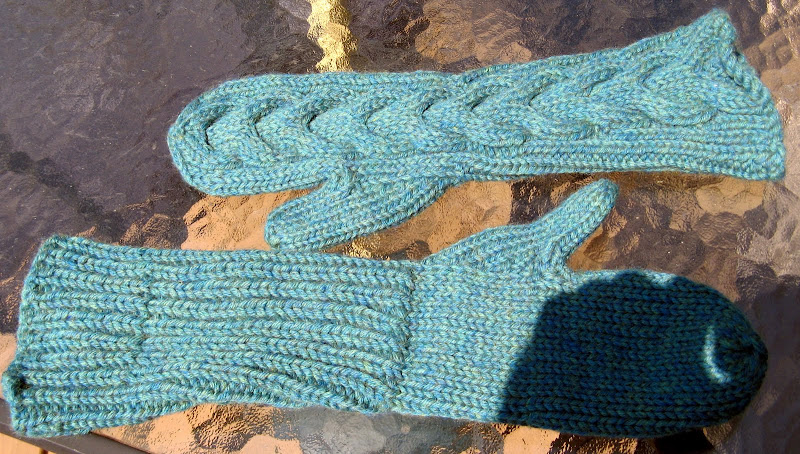 The pair of Dashing fingerless gloves that I finished recently is washed, blocked, and ready to send off to Massachusetts.

I think that I blocked these a little too large. I’ll have to write up some directions for the recipient so that she can “smallify” them if she needs to.

I took the opportunity to experiment with my idea for a “top” gusset to add some flex and reduce strain in the web of the thumb. Here’s a closeup of the gusset. Sorry for the less-than-ideal lighting. I need to practice getting better closeups of knitted fabric.

Instead of casting on a single stitch across the gap (after moving thumb stitches to waste yarn) I cast on 4 or 5 stitches, then gradually decreased them as I worked up the thumb and palm.

I took a couple of snaps of my current ‘train project’ (knitting I mainly work on while commuting). This is a pattern called Dashing by Cheryl Niamath. We have friends in New England who have helped us out of jambs many times over the last 20 years, and these are going to them as a small note of thanks. I’ve got another pair (for them) that is currently hibernating for the winter, but these are moving along pretty well. I modified the pattern to add a thumb gusset.

You’ll see that I’m doing these “2 up” or 2-at-a-time on a long circular needle. This is a technique that helps ensure a few things:

There are drawbacks… I spend a fair amount of time de-tangling the two strands of yarn and organizing the cord of the circular needle. I also feel as if I get more strange looks from fellow travelers on the train. Since many muggles can’t tell crochet from knitting, the sight of someone managing two strings, two needle points, and two mittens at the same time probably stops them from even trying to guess what I’m doing.

. The sales pitch talks about the more-uniform stitch results I can expect (uniform stitches aren’t a problem for me, so I can’t evaluate this claim) and they also mention that your gauge might be a bit off; they say that some users have to go up a needle size to get gauge. I wonder if this is why the mitts are a bit on the snug side?

The main quality I wanted to check out was the “no kink, no curl” low-memory cables. My beloved Addi Lace circular

needles do tend toward the kinky side of the spectrum. Ahem. Not that there’s anything wrong with that.

The cable on these Kollage needles is very, very flexible. I kind of like it, except for one thing… when I would normally be pushing the needle down into the next segment to continue my knitting, there is nothing to push against! The Addi needles slide back in the stitches as expected. The super-flexible Kollage cable just folds over and stops. This means that I have to push a bit, pull a bit, push a bit more. Fiddly. At a recent knit night at my LYS, Susan said “it’s like pushing string.” Exactly. I’ll avoid any jokes about LYS owners being “string pushers.” Honestly. I will.

Overall, I give the needles an A rating. I’d certainly consider buying more. Friends tell me that the Kollage DPNs are particularly wonderful for glove knitting.

The yarn here is something called “Yarn for Sox,” which is very stiff and a bit scratchy. I read several commentaries on Rav that assured me that a few washings will soften this wool up very acceptably. I’m hoping to be done with this project sometime in the first week in January.

*note to self: write a post about the importance of uniformity in knitting… obviously you have thoughts about this issue!

Not that I’ve ever made any money…

As an Amazon Associate I earn from qualifying purchases.